It was late march when we started planning for a Himalayan trek. There were few places but we wanted to try something different. Hence when Tirthan Valley & Great Himalayan National Park (GHNP) was mentioned everyone readily agreed over the plan. When we researched further we also came to know about indigenous birds like Monals, Western Tragopan etc.  The Western Tragopan was my reason to hike in GHNP.

This plan was finalized in no time & bookings were done. The group consisted of 3 singles and two families on sizes 3 & 4 each which also meant we had 3 kids on the block. We kept practicing at Sinhgad regularly and it was departure day in no time. 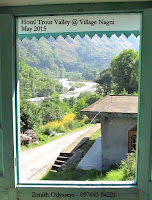 Everybody gathered at Delhi and we caught bus to Manali on afternoon of 19 May 2015.

It was about 7 AM when we got down at Aut and the taxis were waiting for our pick up. The serene Himalayas were so inviting that I wanted to walk all the way to Nagini village but slept in the taxi.

As rest of the day was free, we went to the banks Tirthan River which were right opposite to homestay. later that day, we went to a nearby waterfall. This was one beautiful site. It reminded of movie Avatar. Soon we were back at the homestay and sorted our backpacks for the adventure beginning next day. I had decided not to use services of the porter. So I left my extra clothes in a bag and packed rest of the stuff for leaving behind. 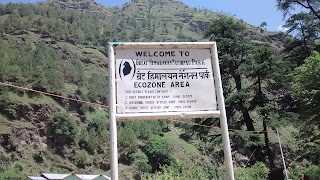 Next day post breakfast, we were dropped at Gushaini Village, which is the starting point of the trek. We all were pretty much excited. We started walking towards to Rolla Campus (Altitude 2100 M) at about 11:30 in the morning. The path was very much like a regular Himalayan National Park. At about 3:30 we entered through the gates of the Great Himalayan National Park and at about 5:30 we were at Rolla Campsite.

Today, we began walking at about 9:30 and the climb was too steep. The distance was much less then yesterday but the climb was tough. There was hardly any place where one could actually rest to relax their feet. Thankfully distance wasn’t much and we reached the Shilt campsite (Altitude 3100 M) at about 2 PM. The view from the tent was awesome. The Tirthan Peak & its adjacent peaks were visible from the mountain range.

The third day of our trek began quite early and we started off at about 8:30. Today we were to
summit Rakhundi and descend to Ghuntaro. Rakhundi Top is at about 4100 M & Ghuntaro is at an altitude of 3400 M. The trek involved mostly uphill walking. I had couple of Déjà vu moments from my previous treks. This one day of this trek was the killer! We all pushed ourselves way beyond our limits & comfort zones. The walk was never ending. By the time we reached Ghuntaro it was about 6:30 pm and everyone was exhausted and hungry.


At about dinner time, the leader made an announcement that we would be resting at Ghuntaro for another day and return the same way we started. This was a disappointing yet right decision as the climb from Ghuntaro to Dhel was more difficult and strenuous. The weather went bad in night and it snowed.

The campsite was located on the slope of a hill within the area of barely some plain. It was probably the most beautiful campsite with rhododendrons surrounding it.
We sat back in our dining tent and chatted. Some of the members went for a walk further towards Dhel in the afternoon.

So after one day rest at Ghuntaro, we again made our way to Rakhundi and from there to Shilt. It was a pleasant walk but walking downhill made it difficult. Again at Shilt, it felt like being home. Again it rained entire night.

Next day we decided to walk ahead of Rolla and camp at the gates of GHNP. We were hurrying off when the trek manager Roshan Singh spotted a snake which he mentioned as a Viper. We all took few photos and marched further. At Rolla, we took a good halt for lunch and then into the river.
Till Rolla, it was descent and then almost a plain walk. At about 4 pm, that day we reached the Gates of GHNP. The last member walked in and the rains started as if they were waiting for us to reach the shelters. Here we enjoyed campfire and the staff also sang some local songs for us. It was a pleasant evening.

Next day in the morning, we trekked to Gushaini Village and then to Manali with a quick stopover at Nagini to pick up our bags.

The trekking in Tirthan Valley is not so popular even now hence this part of forest is more clean and peaceful and away from the clutters of commercialization. There are very few operators in this valley and the staff they have excellent staff. We always felt especially cared for and the 9 year baby on our trek was looked after very well. There are many reasons why I would definitely go back to Tirthan and the foremost being quest of Western Tragopan. 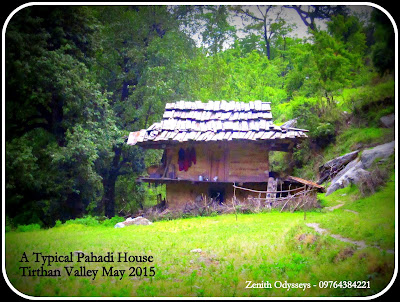 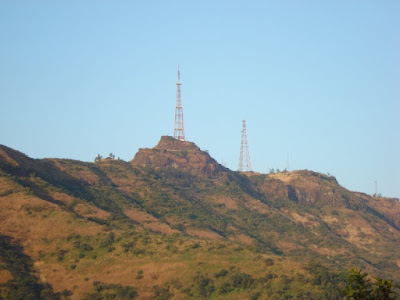 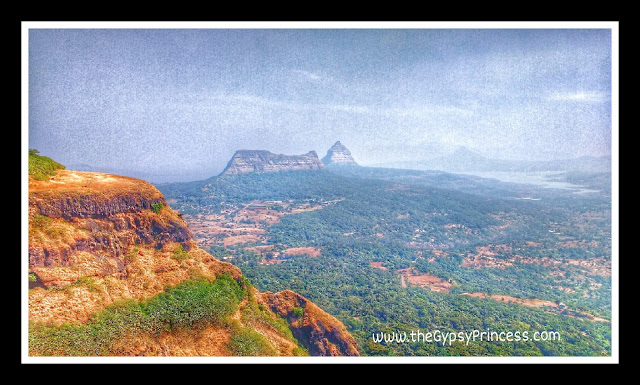